As a brewer (maybe 'former brewer' would be more appropriate), one of the first questions you're asked when you meet someone new is "Go on then, what's your favourite beer?"

Of course, we all have our classics that we return to time and again, there are a certain number of beers that will always hold a special place in my heart, for sure. However I spent yesterday with a little concept bubbling in my mind; having a crush on a beer, so to speak.

A couple of weeks back, I visited The Drunken Duck Inn, between Ambleside and Hawkshead up here in the Lakes. The Duck is known locally for three things; firstly, top quality food and hospitality; secondly, one of the most rewarding and beautiful views in the entire county (maybe even country) and thirdly, Barngates Brewery. John Lloyd began brewing 16 Years ago in the out buildings of the pub and slowly built demand for his range of flavoursome and consistently well-brewed beers from the outset. The kit has grown considerably in the intervening time and now John, together with partner Lucy, has a core range of seven beers ranging from renowned premium ale Red Bull Terrier (4.8%) to the newer additions to the range Goodhew's Dry Stout (4.3%) and the superb Pale (3.3%), which is the beer that has me smitten... 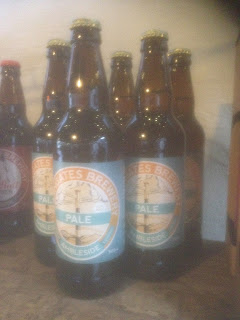 My own picture. Remind me to clean the camera lens on my phone...

On the occasion of my visit back in October, I was shown around the brewery and given a brief potted history, as well as the ambitious future plans that John and Lucy have for evolving the brand. This included developing this year's new beers as mentioned above. I was fortunate enough to try Goodhew's Dry Stout on cask that day and even more fortunate to try the new Pale in the form of a couple of bottles, given to me by John.

This really is one of the finest low ABV beers I've tasted. The bitterness is present but restrained, it's crisp and refreshing without drying the palate too much, it has an overall air of delicate transatlantic hoppiness which doesn't club you to death with a full on citrus and tropical overload nor leave you wanting more, it strikes a beautiful balance. If you like Thornbridge's Wild Swan and Hawkshead's Windermere Pale (and let's face it, who doesn't?), this beer should be right at the top of your must-try list.

I was invited back up to the Duck yesterday for Barngates' celebration of their re-launch, which also includes fantastic new branding from Plain Creative. A free bar was very kindly laid on for those attending from neighbouring CAMRA branches and other fellow beery types in the area. Pale, Goodhew's, Red Bull Terrier and Cracker, their traditional bitter (4.0%), were all in great demand and on stunning form. I managed to polish off the best part of a gallon throughout the afternoon, mostly comprised of Pale, it must be said. My beery crush became a fully fledged romance. 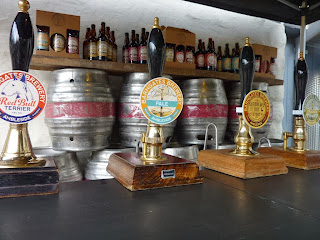 All present were tipping Barngates for greatness over the coming year, myself included. Well-deserved it would be too.

Disclaimer, while the samples I've mentioned and described above were all given to me for free, I've since purchased a case of Pale. I couldn't resist it!
Posted by Alex Routledge at 12:20