In the run up to Christmas, dark is the thing. Dark nights, dark beers, this match is as easy as it gets. This led to a happy coincidence. Port street beer house, a young - but already iconic - beer haven in Manchester is running an 'Old and Dark' Festival. Hardknott, the steadily growing craft brewery from South Cumbria is looking for somewhere to launch its maddest brew to date; Vitesse Noir.

Posted by Alex Routledge at 08:07 No comments:

I have a pretty filthy habit.

It's not something I'm particularly proud of, but I love it just the same. 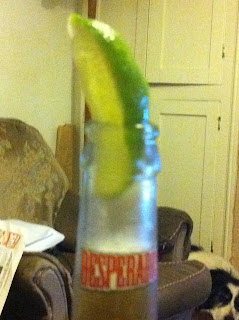 Its RateBeer score is a venerable 1. My favourite review on that particular site gave it 0.7, stating: "Completely undrinkable, I'd rather stay sober for the rest of my life." The same review does go on to say "good carbonation" though, so hey-ho.

I first drank this beer in a Mexican restaurant called Salsa in the Bournemouth suburb of Charminster. Whenever I would visit a good buddy in that area, we would invariably end up in Salsa until midnight at the very least. We once got drinking with the staff and stumbled out at 5 in the morning, having consumed a bottle of tequila and 4 cases of Desperados just on our table of 6, plus hangers on.... possibly. It's a bit hazy.

In terms of its taste, it would be fair to say its pretty rank. Its sweet and perfumed and in no way does it taste of tequila, which is the one thing it's supposed to taste of. But it's light, the sweetness makes it easy to drink - especially when served with the obligatory lime wedge - and its "good carbonation" is beautifully refreshing. Ok, so its in a clear bottle and as such it is a tad skunked, but in goes the lime wedge and it's happy days!

When I tweeted out what I was drinking, I attracted much derision from Zak Avery and el Capitan himself, HardknottDave. But drinking this beer will always take me back to being 20 years old, without much of a care, long hot weekends in Bournemouth and friends all round the table.
Posted by Alex Routledge at 20:00 No comments: