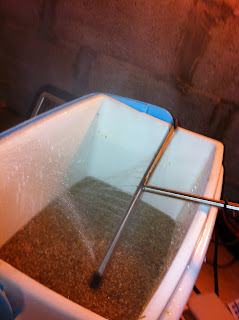 My interest in homebrewing has been resparked by my career move. I've had a few cracks at it before, with a disaster:success ratio of about 5:1, but now it's all different. I'm brewing for a living now, I'm still on the steep side of the learning curve, but the skills and knowledge I've gained already have helped me to pinpoint where I may have gone wrong with my homebrew in the past.

The first thing to clear up was the term "homebrewing". I much prefer the term I've used to title this blog, small batch brewing. For no real reason other than it lends a touch of class to a pastime which has been regarded as the domain of a certain type of individual. You know the type, but lets not indulge in stereotypes...

On this occasion, I can't reveal a thorough recipe as we may yet upscale it for use under the Hardknott banner. I can't even tell you the name I picked for it, though needless to say it licks... er, kicks arse.

Strike Temp was 75*C and Mash temperature settled out at about 63*C, a little lower than I'd have liked, but for the style it wasn't too bad. This was also the first outing for my new mash tun, an insulated coolbox with a tap and fittings to emulate a false bottom. Previously, I'd used a dual purpose bucket to mash and boil in, using a grain bag, but this made sparging awkward.

Along with my new mash tun, I'd bought a proper sparge arm. Unfortunately it is too big for the mash tun, however I decided to use the arm manually to sparge this time and while it wasn't terribly efficient, I still acheived a gravity I'd never managed before. I found that the arm worked quite well on its side, if I positioned it correctly, as shown in the photo.

The sparge itself was a little on the short side, 25 minutes from start to finish. I think this will just come down to experience, but I was only 4 points short of my OG target by the end of the boil, so I was happy enough really.

The idea being to emulate a Kolsch, I had to go for the German noble hops when it came down to it. Bittered with Hallertau 3.8% and two late additions of Tettnang 2.8% for aroma, totalling around 14 IBU's. Not especially bitter, but in keeping with style.

I've used S04 yeast on this batch, as a trial mainly to see if it worked, or whether a more specialised yeast would be better. Having now tasted the beer from the fermenter, the yeast is doing a great job and holds the character of the beer very well. I've transferred to a secondary fermentation in my racking bucket and dry hopped with some wonderful Nelson Sauvin pellets, which is what'll make my Kolsch unique I think.

I'm off on my hols now, but when I get back I'm thinking of brewing a stronger IPA, possibly with a special malt bill. I shall be having a think about that...
Posted by Alex Routledge at 23:58 1 comment: