Burns Night at The Derby Arms

I've never even been to a Burns Night dinner, let alone hosted one.....

But there I was, stepping into the breach. The Hardknott van had failed its MOT on Monday, and then been troublesome enough as to reject the donor parts transplanted into it on Tuesday. Which put vital deliveries to Newcastle back 2 days already. Therefore, when the van passed its MOT on Wednesday afternoon, Dave and Ann had to shoot straight over to the north-east, pretty much right away.

The upshot of all that was the Burns Night dinner, which was to be hosted jointly between myself and Dave, was now going to be hosted by, err, me. Luckily, Jeff stepped in at the last minute to help with proceedings, so some moral support was the very least that was on hand, not to mention the wealth of experience he commands.

The night itself had actually been planned as a little promotion for our role as Brewdog wholesalers, so using the Scottish connection it seemed natural to make it a Burns Night event. The four-course meal consisted of Smoked Salmon with a sweet lime dressing, paired with Punk IPA, Haggis with neeps and tatties (naturally), paired with both Alice Porter and 5AM Saint, Cranachan, paired with both Bitch Please and Hardcore IPA and finally a cheese platter served with a wee dram of Tokyo*.

Generally, the matches worked well. We had tried to pair each course in such a way that one beer would contrast the flavour of the food, where the alternative would compliment. Our downfall was possibly the dessert course. The rich creaminess of the Cranachan was undermined by the Bitch Please and somewhat overwhelmed by the Hardcore. It was the only downside to an otherwise successful beer matching event. The star of the show, as it quite often is, was Tokyo*. This is an immense beer on its own, but paired with cheese it takes on a whole new dimension.

The Derby Arms, in Witherslack near Kendal, is a stunning pub, located just off the A590, the main road through the south of the county. It is now being run by one of my former colleagues from my days at the Masons Arms, Strawberry Bank, A 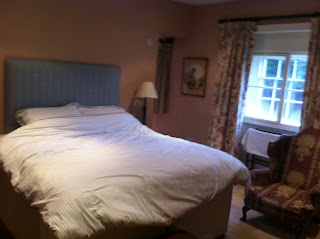 dam Thorpe. Adam shares my passion for decent beer, but is more sensitive to the needs of higher management shall we say. He's clearly making an impression in his new job too. The quality of the food at the Derby has always been high, but the meal prepared for us was stunning, full rich flavours and rustic, yet comely presentation. All this says nothing of the rooms, the example I was treated to, Room 4, was very grand, with the biggest bed I've ever seen, let alone slept in.

The Derby will hopefully be the venue for a proper Hardknott night in April and we are also hoping to play a part in their inaugural beer festival in June. Personally, I'm excited to keep my ties with my old partner in crime as strong as possible and to make The Derby Arms a destination for fans of top quality beer, served in relaxed and friendly surroundings, whether Cumbrian themselves, or a visitor to our realm.
Posted by Alex Routledge at 22:16 No comments:

One week later, I've learned so much.

No doubt my tweets from the Brewlab course may have been picked up by one or two of you. They probably weren't entirely representative of my overall experience. There was the minor inconvenience of Kevin, interrupting procedings and generally not getting stuff the rest of us were completely familiar with. On the whole, however, the course was very informative, I learned a great deal, particularly in the areas of liquor treatment and yeast culturing.

Over and above all that though, it gave me inspiration. As most folks will know, I've done a bit of homebrewing (I still hate the term, but for convenience, it'll do) before, in fact I blogged about it last time I did a little brew. People who have tried my beers have been relatively impressed with them, in fact I'm confident in saying they were pretty good, considering what I knew then compared to what I know now.

So I'm also confident in saying I could produce some kick-ass beers at home on my small kit with the commercial knowledge I've picked up in the last week or so, combined with the practical experience gained at work. I'm actually quite excited about it, to the point where I have a theme and basic branding worked out. Too far, too fast, I know, but when the mood takes me I tend to crack on with these things.

Next job is to clear out our old shed and fit it out with power and water so I can actually brew in there. So please excuse me, I must be on my way...
Posted by Alex Routledge at 09:41 No comments:

It's been a pretty mental couple of weeks over at Hardknott towers. The new year saw us with orders for pallets which we are still attempting to catch up with. Dave and Ann have been shooting off around the country sealing deals and bringing back exotic items from the far north.

All of this has culminated in me checking on my blog, rather belatedly, and finding that I've gone past 1000 page views in the last few days. (I've also found a draft I started on New Year's Eve and had forgotten all about, but we shall gloss over that...)

Anyway, thanks to all who've popped by. My aims for blogging in 2012 are threefold:

a) I'd like to do more of it;
b) I'd like to get better at it;
c) I'd like to learn how to more carefully tread that line between interesting and controversial.

I hope that meets with everyone's approval!

In the meantime, I'm driving across to Sunderland today in preparation for taking the Brewlab Brewing Skills Development course ovedr the next 4 days or so. This will, all being well, improve our consistency of putting great beer out there (which I'm told is already pretty good anyway), as well as help me sharpen up my practices and make us a bit more efficient.

So here's to a year of great beer, great company and great fun.
Posted by Alex Routledge at 10:37 No comments: