I wrote a blog last night. You might be aware of that.

But I also wrote some disparaging tweets on the same subject. The blog was, to quote bloggers I have a lot of respect for, 'well written' and 'crystal clear that it was my opinion', which is very gratifying and thanks to all who have tweeted me. The tweets I wrote were not so objective, to the point where, taken alone, I'm just slagging off someone else's beer.

What I failed to grasp at the time was that my twitter account is viewed under the Hardknott banner, I hadn't even put a disclaimer in my twitter bio. I have always viewed it as my own personal venting outlet, whether venting an immature joke or my displeasure at a beer.

Publicly, I want to apologise to Dave and Ann for any possible sullying of the Hardknott name. Obviously this wasn't my intention, I'm committed to building our brand and working with all of our brand partners in Cumbria and beyond. I'd also like to make public my apology to James and those at Brewdog, I acted unprofessionally in terms of my responsibility to Hardknott.

I'm slowly realising now that the blog, if re-posted wouldn't be offensive, it would still be a bit of a dig, but I think it was balanced and clearly my opinion. However, being such an incompetent blogger, and being half asleep when I took the decision to remove it, the post is now lost. If anyone, by some stupidly remote chance, got a screen cap, I'd certainly be grateful.

I've tweeted to say that I'm off twitter until the New Year. I may be back before then but with a different username/bio. Likewise with this blog, I'll have a play with the name and change things around to make it clear its not affiliated with Hardknott. 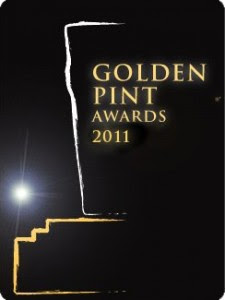 This is the first time I've done a Golden Pints list and after what has been a pretty tumultuous - but utterly satisfying - year, I think I'm in a good position to answer as objectively as I can. I've tried to be as professionally modest as I can be with Hardknott beers, but Infra Red has found its way in there purely as it remains one of my favourite beers since the first time I tried it a little over a year ago.

Apologies, I'm not the type to take proper notes when tasting beers, so this may be a little more sketchy than I'd actually prefer. Hey ho....

Best UK draught beer: SWB Cohort.
Sampled on cask at the Free Trade Inn on twissup, then again on keg at Port Street Beer House a couple of weeks later, this is one of the highlights of my beery year. Honourable mentions: Hawkshead NZPA, Magic Rock Human Cannonball.

Best Overseas draught: Duchesse de Bourgogne.
I had this at Port Street Beer House in November. What an absolute stunner she is too! Honourable mentions: De Molen Vuur & Vlam, Galway Hooker.

Best Beer Book/Mag: haven't had time to read any!

Food and Beer Pairing of the Year: Tied between Hardknott Granite 2011 and Blacksticks Blue Cheese & Hardknott Vitesse Noir and Rich Chocolate Tart, Fayrer Garden style! Apologies for picking two Hardknott beers in this category, but its obviously what I've been most involved with at matching dinners.

Best online spat: Hardknott Dave and Tandleman. I think we're all glad that got sorted out...

Ok, so let the arguments and/or derision commence...
Merry Christmas and a Happy New Year to beer geeks everywhere!
Posted by Alex Routledge at 22:21 No comments: